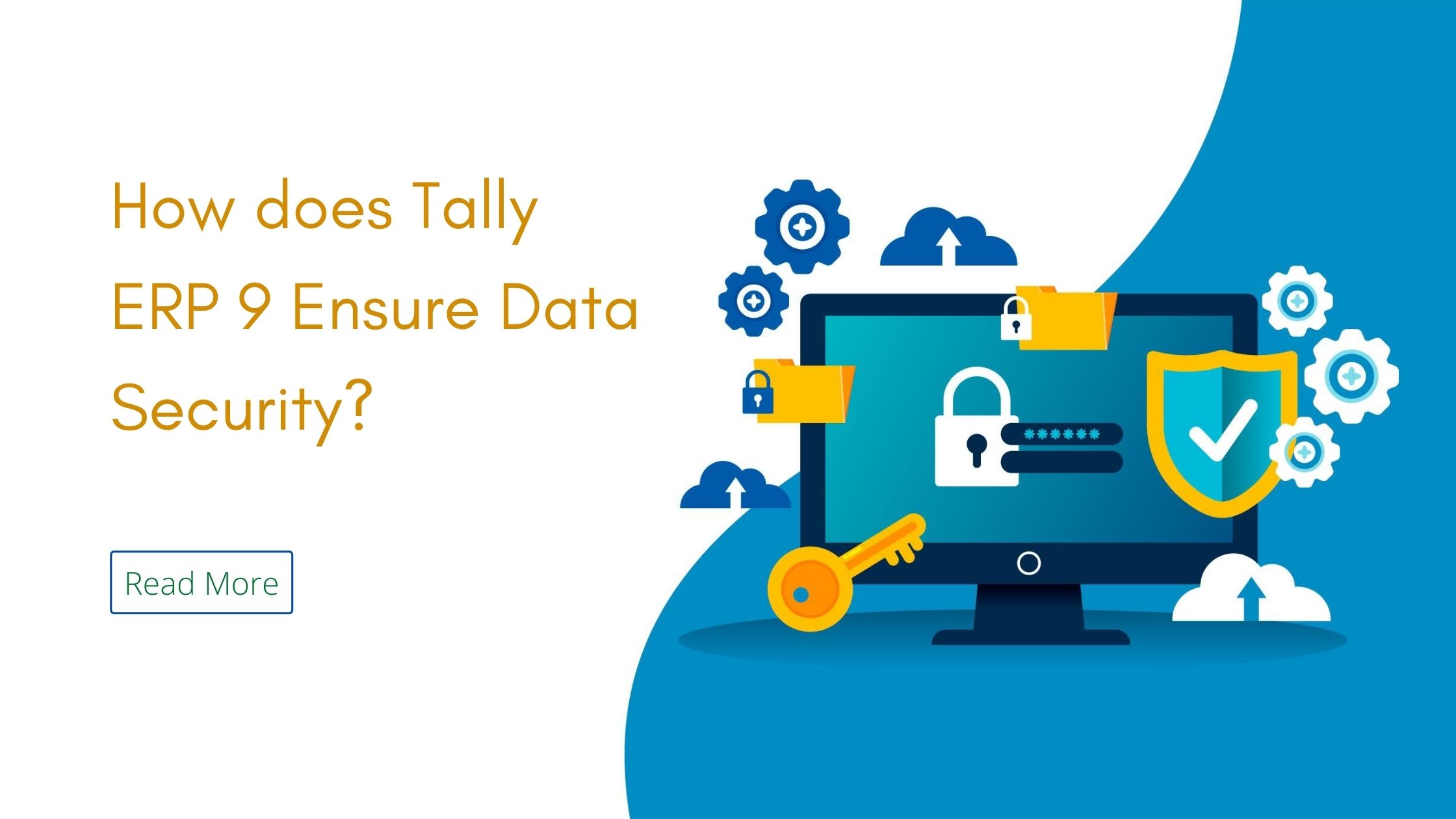 While data security is the main concern in this digital decade, there is security control in Tally that helps to keep its Data security at its best. The data entry inTally ERP 9 by businesses helps them execute the calculations with much ease and enables them to an even more advanced level by organizing its safety. After all, this is the reason why Tally software has a choice for CA’s, financial institutions, and businesses to make their work effective. 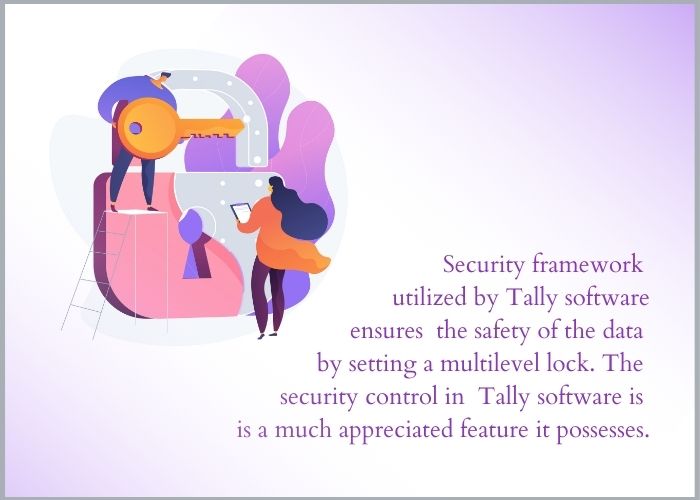 What is the purpose of Tally security features? The security framework utilized by Tally ensures the safety of the data by setting a multilevel lock. Thus uses of this software will never let your data be in the hands of the wrong person. The security control in Tally is a much-appreciated feature it possesses.

It ensures the protection of customer data through its multi-level security connection. This validates the Tally ERP 9 and Tally Software Services licenses before establishing the connection.

The data exchange between Tally ERP 9 and Tally.Net Subscription happens through an Encryption Algorithm that has a triple layer of security and, the data corruption and alteration can be found through message digests created at the time of transfer.

The exchange of data occurs through a configuration data synchronization in Tally ERP 9 which should be authorized by the users to send encrypted data from one system to the other. This data is utilized only for synchronization and after which Tally.NET Server does not retain this.

Tally ERP 9 can store customer data in encrypted form using Tally Vault and this Tally.NET Server encrypted data is available in both disk and memory.

The network port is a unique feature of Tally ERP 9 and such a network service does not open up until the user requests to initiate data transfer. Also, this port is unable to be accessed by a third party or Tally. 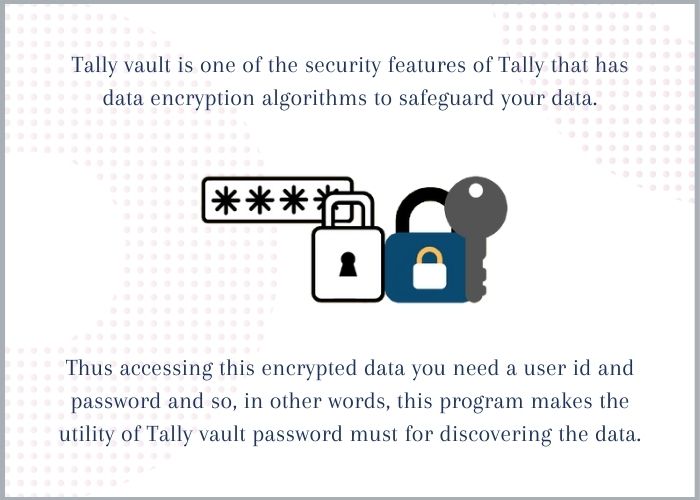 What Measures Have You Taken For Your Tally Data Security?

There are Tally security features for data and functions that enable data security for businesses and their customers.

The Tally vault is one of the security features of Tally that has data encryption algorithms to safeguard your data. Thus accessing this encrypted data you need a user id and password and so, in other words, this program makes the utility of Tally vault password must for discovering the data. The Tally vault meaning restricts the number of users who can read the data transferred.

Other features of Tally ERP 9 are the two levels of security that they provide. Security-driven access to the data occurs either as owner or data entry. The owner can do most with the features except the ones that can only be done by the administrator like company alteration and Tally audit.

The data entered on the other hand is aimed so that the user cannot access any other right to modify the data which interferes with some other work. As per the requirement, an administrator can increase or reduce the rights given to the user.

Auditing allows validating the data that are created and understand whether it is genuine or not. It’s Tally ERP 9 feature also allows the same to understand if there are changes in the Tally audit listings of transactions. This helps to track the changes that happened to our data and infer any online threats that might have happened if any.

Tally server provides for creating the backup of your data which helps you to restore any of the lost data.

Considering the pitfalls of the earlier version Tally Solutions released Tally Server 9 which is defined as an Enterprise Class Product. Now the platform allows for working on the data by six or more users which was not possible earlier.

Apart from Tally Multi-users compatibilities, they also solve the issue of data security by restricting the range of users to which the physical files stored in Tally will be visible. In addition, they also make the log available and this can be utilized to monitor the activities of each user involved besides controlling the users’ rights as well in the platform.

But besides following the program’s Tally server 9 feature of security, users should think beyond it and practice steps to secure the data as well as escape from threats of such kind. Here are a few strategies that could be practiced for this purpose.

Generally, for any data, and especially when it is about that for accounting, the data should not be lacking any backup. The presence of your data in the backup system helps you to access, modify and retrieve the data whenever you need to. The current trend for backup is cloud services. This is an ideal one since the decentralized system allows access and editing from anywhere anytime without any restrictions. And in case you have an automated backup option to the files, that’s better than a manual one.

Much unexplored factor of security is how the rights are divided among the users. The options for controlling the access to any data available in the system can be modified by the organization. Voucher Type level security is a module through which one can control the users’ access rights. Restrictions and division of access rights among the users enable work completed without any interference of other’s work and diminishing the accountability.

In a large organization, the division of task makes easy to complete any task but at the same time, their activities should be tracked to account for the credibility while entering Tally data. The user usage history in the form of a report helps to analyze the entries deleted and the time of action.

What is the secure way to access your Tally data?

Tally ERP 9 provides several features that ensure safe and easy accounting and auditing of your accounts. But apart from offline use, cloud technology has much to offer. User data tally auto-backup ensures that the data is not lost and if this has not been explored, Tally on cloud demo and TSS features in Tally are essential tools to be used. For any details visit Tallycloudhub. 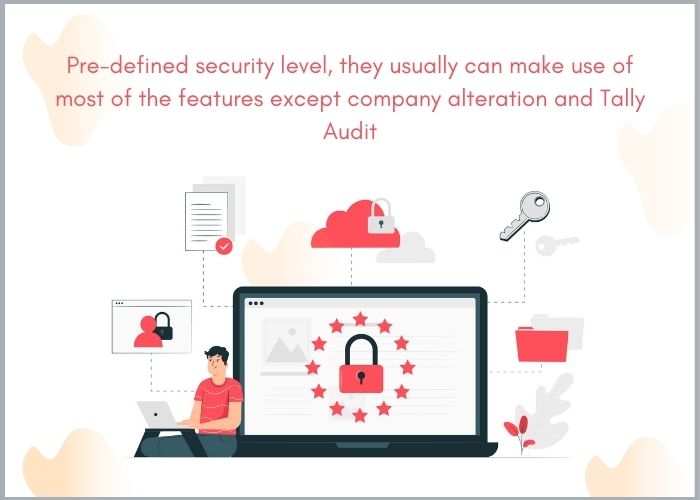 What are the types of Security Levels?

Tally ERP data security levels work at either owner or data entry side. The owner has much more access rights and the administrator can restrict access or assign new as per the requirement. At this pre-defined security level, they usually can make use of most of the features except company alteration and Tally Audit. Data entry has restricted access, mainly for entering the data, and administrators can assign or restrict this.

Data access is set by Tally security control password and this even has the option to provide Tally ERP 9 user access control where rights for accession is given to a limited number of users. A serial number may also be used for TDLs. This is a way to escape from the TDL controls when these TDLs are disabled in the Tally.ini file. Also, the information has no access allowed in the Tally ERP 9 server since this is stored in the system and not in the server.

How Tally Protects Your Data? 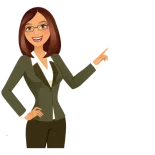